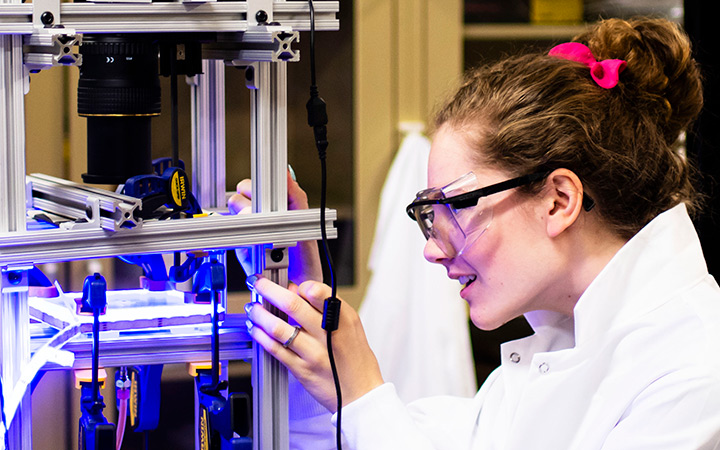 Cal Poly physics faculty make significant contributions to fundamental and applied knowledge about the world and the universe. Undergraduates explore, experiment, publish and present alongside their faculty mentors, creating a vibrant learning environment. Below you'll find a sampling of what students and faculty have done and discovered in the last year. 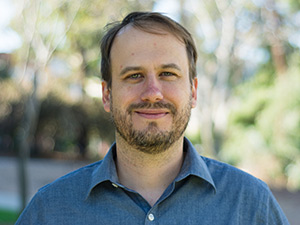 Over the past year, Matthew Beekman and his students have been working to construct a custom measurement system to measure thermomagnetic transport properties in his lab. The measurement system, which is nearing completion, will be used to study the electronic properties of a variety of scientifically and technologically relevant materials as a function of temperature from 78 K to 700 K. Physics majors Randy Sterbentz, Roger Dorris, Juan Tolento and Dominic Gallelli have all contributed to the project.

For his senior project, in collaboration with researchers from University of San Franciso, Illinois Institute of Technology and the National Institute of Standards and Technology and advised by Beekman, physics major Michael Troesch analyzed temperature dependent synchrotron X-ray diffraction data to understand how the Na guest content in NaxSi136 clathrates affects thermal expansion in these materials. A new mechanism for controlling thermal expansion in guest-host crystals was discovered in this work, the findings of which were published in Applied Physics Letters and presented by Beekman at the Spring 2018 Materials Research Society meeting in Phoenix.

Physics major Tom Linker, who is now pursuing a Ph.D. at the University of Southern California, gave a talk on his senior project research on modeling thermomagnetic transport properties of materials at the 2018 American Physical Society March Meeting in Los Angeles, Calif. 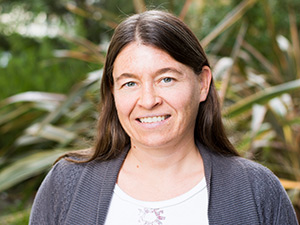 Vardha Bennert spent spring quarter 2018 on sabbatical at the Max-Planck Institute for Astronomy in Heidelberg, Germany. She worked with her collaborator Bernd Husemann on 3D spectroscopic data of active galaxies to determine the motion of the stars in the bulge of these galaxies. Since active galaxies have a bright central core, it is challenging to measure the underlying stellar absorption lines in the center via traditional methods.

Together with a team of international collaborators, Bennert and Husemann have gathered data with the new 3D spectrographs MUSE and KCWI at the largest optical telescopes of the world, the VLT and Keck, respectively. Using a technique to subtract the bright central core developed by Husemann, the team can measure the so-called stellar velocity dispersion and correlate it to the mass of the supermassive black hole in the center.

The latter was previously determined by the team using a time-consuming observational technique called reverberation mapping; observations included several Cal Poly undergraduate students. The relation between black-hole mass and stellar-velocity dispersion is important not only since it suggests a co-evolution between galaxies and black holes but also since it is an essential way to measure black hole masses in active galaxies. 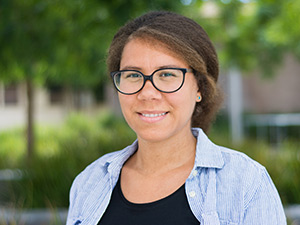 Edwards also authored a chapter introduction for the “Royal Astronomical Society of Canada Observer's Handbook 2018” and an article on the formation and evolution of galaxy outskirts, published in the Proceedings of the International Astronomical Union.

Nathan Keim spent four weeks of winter quarter 2018 in residence at the Kavli Institue for Theoretical Physics in Santa Barbara as part of an international program to explore how materials can retain information about past conditions. During his visit, Keim also presented research at a conference for high school physics teachers from across the U.S.

Last summer, Cal Poly students Ben Kauffman, Dani Medina, Esmeralda Orozco, Audrey Profeta and Juan Ortiz Salazar worked on experiments to study memory formation in a liquid contact line and to develop sensitive methods to characterize suspensions of passive and self-propelled particles in collaboration with researchers from the University of Minnesota (see photo at top of page). Keim and Profeta presented at the Yosemite Fluids Meeting in September, and Keim, Profeta and Medina will present at the American Physical Society Division of Fluid Dynamics meeting in November in Atlanta. 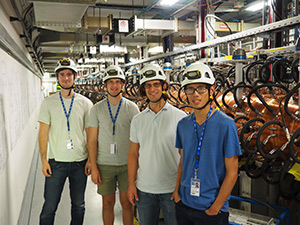 Themis Mastoridis received a Early Career Research Program grant from the Department of Energy. With this and additional funding from the National Science Foundation, he and his students are working on accelerator physics research. Their goal is to optimize the accelerator systems in particle colliders to improve performance and reliability.

Mastoridis and his students are studying a future upgrade of the Large Hadron Collider (LHC) at CERN, Geneva, Switzerland, known as the High Luminosity LHC. Major upgrades will be required to achieve an increase of collision rates by up to an order of magnitude. They are estimating the performance of this future accelerator, identifying possible limitations, and designing mitigation techniques.

The protons in the LHC are first accelerated to an intermediate energy by a chain of smaller accelerators, the last of which is the Super-Proton Synchrotron (SPS). The SPS was a very important accelerator in the 1980s, leading to the 1984 Nobel Prize in Physics. Some of its systems are outdated, though, and it is currently limiting the LHC performance. Mastoridis and his students are investigating various options for the SPS accelerating system upgrades.

The group is also working on design studies for the Compact Linear Collider, a proposed accelerator at CERN that will collide electrons and positrons at the Teraelectronvolt range, an energy that has never been achieved by an electron/positron collider. 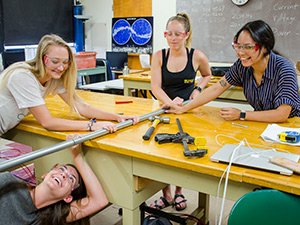 Liberal Studies majors Sara Bettencourt, Sarah Coyle, Carly Muller and Aileen Saucedo worked with Professor David Mitchell over the summer to build a set of dipole radio antennae. The students built the antennae and receivers from basic components and constructed them at the Cal Poly Leaning Pine Arboretum. The radio observatory was successfully used to listen for storms on Jupiter induced by its closest moon, Io, and can also be used to observe solar activity, which was at a historic minimum over the summer. The students also spent several weeks acquiring data at the Cal Poly Observatory to look for extrasolar planet transits.

In winter quarter 2019, the radio antenna system will be installed at San Benito Elementary School in Atascadero. The four students will create a curriculum for the teachers and students at that school for their senior projects before they all graduate in spring. 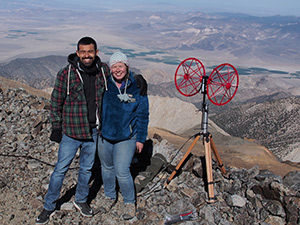 Attendees at a four-day workshop on the ANITA
experiment hosted by Cal Poly.

Stephanie Wissel received the prestigious NSF CAREER Award from the National Science Foundation this year to explore a new kind of telescope. The telescope would be placed on a high mountain and pointed down, not up, to look for interactions of subatomic particles called neutrinos with the Earth’s crust. Rather than a traditional optical telescope, this one searches for the radio waves emitted due to the neutrino interaction. Her group has already made progress by surveying the radio backgrounds at the White Mountain Research Station site. Physics undergraduates Caroline Paciaroni, Mercedes Vasquez and Andres Rodriguez helped build and calibrate the equipment for the survey and traveled to the site for the survey.

Wissel and her group have also been active in experiments searching for neutrinos interacting in Antarctic ice as well. As part of that research, mechanical engineering undergraduate Zoe Riesen contributed to an accelerator run at the SLAC National Accelerator Laboratory in Menlo Park, Calif., to test whether RADAR can be used to search for neutrinos.