Schematic of the evolution of an unstable black string in the efficient and physically elegant model that Fraser and Fleischman developed. The model fits the radii shown to the high-cost numerical data found by Lehner and Pretorius in Phys. Rev. Lett. 105, 101102 (2010).

Working with Scott Fraser in summer research and her senior project, physics senior Laura Fleischman investigated the non-uniform shapes of black strings (cylindrical black holes). Black strings have attracted intense theoretical interest for decades because they are known to be unstable to long wavelength perturbations. This phenomenon is analogous to a thin water stream rippling from a faucet, but it is much more interesting: the instability is known to evolve a black string into a fractal-like beads-on-string structure of black holes connected by ever-thinner black strings. This structural phenomenon also occurs in fluids, with fractal-like generations of droplets connected by thin fluid filaments.

Fleischman developed a simple and powerful conservation model for the evolved shapes of unstable black strings, motivated by the correspondence between black strings and fluids and using results from general relativity. Using her conservation model, Fleischman predicted the sizes of multiple generations of black holes and connecting string segments to within 2.7 percent of the values known from difficult numerical techniques in general relativity.

The calculations in the conservation model are fast and elegant, in contrast to the enormous computing resources required in numerical general relativity to evolve one black string of one initial size (the equivalent of two months of continuous running time on 100 processors). Fleischman’s conservation model is also very general: it can be applied to black strings with any initial size, so it can be used to predict undiscovered shapes. This elegant model complements, and can potentially supersede, a decade of difficult numerical work.

Fleischman is also developing an intriguing connection to the long-held Cosmic Censorship hypothesis in general relativity, which postulates that the singularities inside black holes and black strings always remain inside and are never exposed. If this is true, then unstable black strings will not break by pinching off. It is tantalizing that the known fractal-like evolution of an unstable black string extrapolates to a breakup, but this breakup cannot be confirmed because finite computing resources cannot track the evolution indefinitely. This extrapolated breakup can be interpreted as strong evidence that Cosmic Censorship is violated. However, Fleischman is developing a new way of understanding black strings, including strong evidence that a black string might not break, which suggests that the Cosmic Censorship hypothesis can be saved. This research was partially funded by the College-Based Fees and Frost summer research program and is being developed to submit for publication. 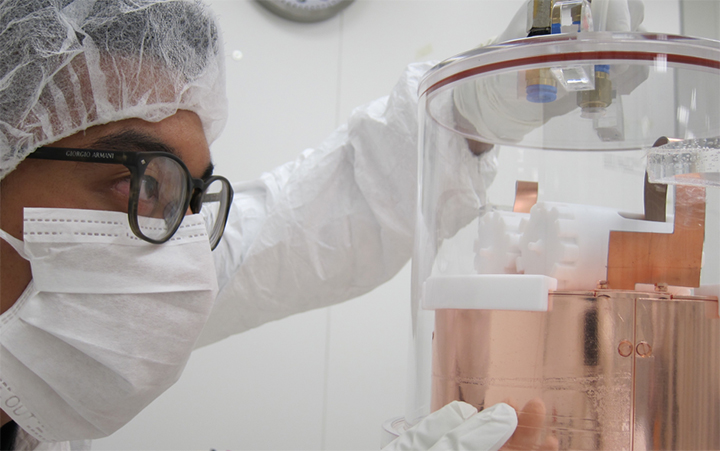 Read more about this milestone

This past academic year, among other things, I continued my work on the upgrade of the Large Hadron Collider (LHC) at the European Organization for Nuclear Research (CERN), specifically the High-Luminosity LHC. The upgrade includes the implementation of resonant structures called crab cavities. These structures turn the clouds of particles traveling at the speed of light “sideways” so that they are moving like crabs. The result is an increased geometric overlap of the colliding particle clouds and thus a higher collision and data collection rate.

Due to technical limitations, however, these crab cavities introduce noise to the particle clouds. Physics major Philippe Nguyen and physics and mathematics double-major Aron Daw investigated the effectiveness of a fast feedback system to mitigate these noise effects using multi-particle simulations. Their results were well received at CERN and suggested that such a system has a potential to improve the Hi-Luminosity LHC’s performance.

Devin Wieker studied the possibility of using the crab cavities to clean the edges of the particle clouds by deliberately injecting carefully selected “noise” into the system. Wieker, Daw and Nguyen visited CERN for two weeks at the end of the summer.

In addition, Jake Hargrove and Dylan Tucker worked on the upgrade of another accelerator at CERN, the Super-Proton Synchrotron (SPS). They worked on modeling the proposed upgrade of the SPS accelerating system.

This summer, Professor Pete Schwartz and a research community of 19 students, five faculty members, and six collaborating companies (AidAfrica, Sanga Energy, JLM Energy, SLO Guild Hall, Rincon-Vitova Insectaries, and Social Ice Cream Company) investigated multiple projects relating to the direct use and management of solar electricity. The community is interested in the potential of solar panels to bring electricity to the world’s poor as the cost of the panels decreases. They also see a possible transformation in how the industrialized world uses electricity due to the development of free but variable solar electricity.

The research takes place in a variety of locations: on campus, at cooperating companies’ facilities, in African villages, at the Student Experimental Farm, and at researchers’ homes. Physics instructor Nathan Heston provided some of the research groups with significant lab and field guidance, as well as motivation and assistance with implementation.

Professor Stephanie Wissel and physics majors Donald Hersam and Caroline Paciaroni assembled and tested the Antarctic Impulsive Transient Antenna (ANITA) in Palestine, Texas, at NASA’s Columbia Scientific Balloon Facility last summer. ANITA searches for cosmic rays and neutrinos with energies produced in the most violent explosions in the universe. By pointing radio antennas at the icy Antarctic surface, ANITA looks for the radio frequency radiation produced from the millions of particles moving close to the speed of light produced when a neutrino interacts in the ice or a cosmic ray interacts in the atmosphere.

Hersam, Paciaroni and Wissel were part of the team that assembled and tested new analog electronics and antennas for the fourth flight of ANITA. After passing a NASA inspection in August, they packed up the experiment and sent it off to Antarctica where Wissel met it again for the launch in early December.

Wissel led a team of researchers on an expedition deep into the heart of West Antarctica where they manned transmitters as ANITA flew overhead. Hersam, Paciaroni, physics major Alex Crawford, and other members of the NuRad Group at Cal Poly monitored the data transmitted over satellites and provided feedback to the entire ANITA collaboration. The NuRad Group is an interdisciplinary research group headed by Wissel and Professor Dean Arakaki of the Electrical Engineering Department with student members from both physics and electrical engineering.

The ANITA collaboration is led by Professor Peter Gorham with collaborators from around the world and funded through NASA. The students’ work is funded by the university, student fees and a donation from Randy Knight, physics professor emeritus.