Home : Everyone Belongs: Diversity, Equity and Inclusion in Physics

Everyone Belongs: Diversity, Equity and Inclusion in Physics 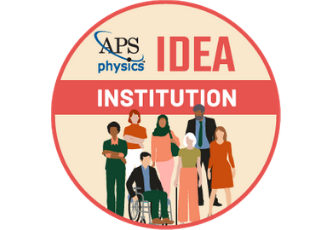 As part of its ongoing efforts toward increasing diversity, embracing equity and committing to inclusion, the Physics Department has been engaged in three national initiatives.

The department is an active participant in the Inclusion, Diversity, and Equity Alliance project of the American Physical Society, joining a network of around 100 U.S. and foreign universities, national labs and research centers that are developing and implementing plans and policy changes to ensure that all department members thrive. This massive campaign allows us to benefit from broader community efforts and informs our work locally.

In winter 2021, the department was selected to implement the recommendations promoted by the American Institute of Physics’ Task Force to Elevate African American Representation in Undergraduate Physics & Astronomy (TEAM-UP) report. The report recommends evidence-based practices that physics departments can adopt to recruit and support African American students, who are underrepresented and underserved in the field of physics.

The department also contributes to the College of Science and Mathematics’ leadership efforts to build our collective capacity for student belonging, especially for those who have been historically excluded from the sciences. This project is funded by a planning grant from the Howard Hughes Medical Institute.

The department is engaged in these efforts because of its fundamental value that as physics belongs to everyone, everyone belongs in physics.